Christopher d’Archangelo, Contrary to Intuition, Let’s Begin with an Image

The first part of exhibition was held at CAC Bretigny (19 June – 30 July, 2011). Curators: Dean Inkster and Sébastien Pluot in collaboration with Pierre Bal-Blanc 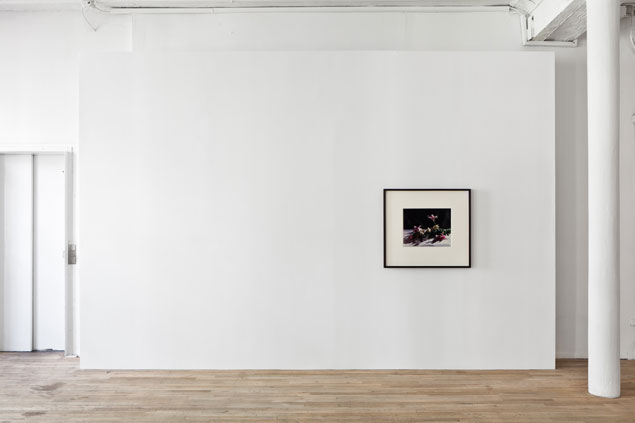 On March 9, 1978 Christopher D’Arcangelo stood in the Louvre. He had just completed a renegade action in the museum, having removed Gainsborough’s 1745 painting Conversation in a Park from the wall and placing it on the floor, directly in front of where it had previously hung. In the now vacant wall space he had taped a Xeroxed note containing a statement on anarchism—“When I state that I am an anarchist, I must also state that I am not an anarchist, to be in keeping with the (…) idea of anarchism”—as well as two questions regarding the displacement that had just been enacted:

Before considering these questions, let us focus on the figure of D’Arcangelo. D’Arcangelo as a physical presence was almost always at the center of his practice. He was as a corporeal being negotiating the conditions and effects of institutional power upon the constitutional and material reality of the body. He was just as often a ghost, his absence and willed removal operating as an even more forceful consideration of how the self might be constituted with regards to the bounds of hierarchical, museological architectures, and ideologies. In the photograph, D’Arcangelo has completed his interventionist operation—he must now make his getaway. A palpable and simultaneous sense of accomplishment and nervous tension are evident in his face, in the wiry tightness of his posture. At this moment, there is but one objective: to depart, to be uncaught.

D’Arcangelo did exit the Louvre unnoticed. And he managed to elude much else, as well. Something of a fugitive of history, D’Arcangelo, through a series of self-consciously deployed strategies (temporal and architectural specificity, fabricated anonymity, a denial of exchangeable object-based production, brevity of career, an antagonistic resistance to all channels through which art is “seen”) was mostly able to stave off the prevailing conditions of historicization and canonization—reception, even. Unlike most cultural practices, the a priori assumption of posterity and posthumousness are little accounted for in his work. More often, they are denied.

And so we focus on this image of escape with reason, realizing that it has a metaphorical value. This desire—to remain uncaught, invisible—was operational at all levels of D’Arcangelo’s practice. He fostered, in the words of Thomas Crow, procedures of working by which to remain “unwritten.”

The essential simultaneity of absence and presence provides a connective subtext to the current D’Arcangelo exhibition on view at Artists Space, but it also creates a myriad of fissures in the conceptual underpinning of the show. D’Arcangelo is reconstructed not through archival materials, but rather through a series of reminiscences and considerations provided by friends and colleagues. On two low tables are six flat-screen televisions, each playing an interview about D’Arcangelo and his work; the interviews are with Steven Antonakos and Naomi Spector, Benjamin H.D. Buchloh, Daniel Buren, Ben Kinmont, Peter Nadin and Lawrence Weiner. Each interview utilizes an identical editing format, shifting between “talking head” shots and close-ups of the speaker’s hands filing through dossiers of material related to D’Arcangelo. This filmic documentary mode presumes that D’Arcangelo can be unproblematically reconstituted as a historical presence, despite the deeply ambivalent and complicated relationship that he had to both history and presence as framing preconditions for his practice.

This practice took several diverse (though related) forms. There were a series of museum and gallery interventions in which he consciously risked both bodily harm and governmental persecution. These ranged from chaining his body to the entrance of The Whitney Museum of American Art to spray painting the reflective plastic covering obscuring paintings in the Norton Simon Museum, declaring that the reflection produced by this surface created “a painting not painted by an artist but painted by the museum,” to the intervention in the Louvre described above.

There were a concurrent series of “Functional Constructions,” created in collaboration with the artist Peter Nadin. These works were the collaborative products of manual labor that the artists had undertaken in order to subsist, being generally unable or unwilling to do so within the economic constraints of the art economy. As such, what D’Arcangelo and Nadin produced, through a simple repositioning of the concepts of “art(ist)” and “work(er),” interrogated a space of production, i.e the bourgeoning loft culture of downtown New York, external to the imperatives of institutional acceptance and valorization. In his notes (1978) for the Functional Constructions, D’Arcangelo writes:

A. The works are functional constructions or altered or refurbished spaces that are done in concurrence with the existing social economic boundaries.

B. As workers our product must fit in the existing social economic boundaries in order that we may survive.

– the works are executed purely as a means to survival
– no product can exist on a purely visual level
– the work is visible and is therefore visual, but if we were to proclaim that it was only visual, it would no longer maintain its already viable social economic base.

Finally, D’Arcangelo participated in a group exhibition at Artists Space in 1978. His contribution to this exhibition was two-fold: he provided a wall text in which he gave a focused critique of the economic and ideological presumptions of the institution in which he had been asked to exhibit. He also requested that his name be removed, and replaced by a blank space, from all supplemental materials: invitation, catalogue, etc. This would be his singular contribution to more ‘traditional’ exhibitionary demands, and I use the term loosely, before his untimely death in 1979.

In his notes (1978) for an action at the Rosa Esman Gallery in New York, after being uninvited from a group show, D’Arcangelo asks a prescient question: “What does it mean to be uninvited?”. Following this logic, and in light of his current revival and reappraisal, it is now time to also ask what it means, à la Crow, to be “unwritten.” What does it mean to be invisible? And what might be the benefits of inhabiting these liminal states upon which D’Arcangelo formulated his career? As he now—finally? fatefully?—becomes subject to the twinned processes of institutionalization and historicization, these questions are increasingly necessary to any consideration of D’Arcangelo’s work.

D’Arcangelo’s colonization of externality, liminality, and temporality did not exclude a sustained dialogue with art historical precedents. In fact, his practice is deeply embedded in a consideration, and extension, of the sculptural and conceptual advances of the 1960s and earlier 1970s. The Louvre intervention could be seen as a distillation of these preoccupations.

In order to explicate this, let us return to the questions that D’Arcangelo proposes in the Louvre. These questions are certainly informed by the earlier advances of institutional critique—namely, the work of Daniel Buren, for whom he worked as a studio assistant, and Michael Asher. In many ways, this work demonstrates a fusion between two different critical strategies—integrating the overt politicization of Buren with the architectural specificity of Asher. Further, when D’Arcangelo leans the Gainsborough painting against the floor, he engages the generally overlooked architectural space where the floor is joined with the wall, where the horizontal becomes the vertical, and D’Arcangelo subtly interrogates the attendant ideological presumptions embedded in this transition. This space was, of course, fundamental to both the Minimalist and Post-Minimalist sculptural narratives. Examples of this are many and diverse: Richard Serra’s Chunk (1967), Splashing (1969) and Prop Pieces (1968-1969); Eva Hesse’s Hang Up (1966) and Accretion (1968); John McCracken’s planks; Lynda Benglis’ Corner Piece (1969). Michael Asher utilized this space in his exhibition at Lisson Gallery (1972), creating an architectural remove around the perimeter of the gallery space. I would argue that D’Arcangelo enacts a radicalization and reconfiguration of the sculptural paradigm in the Louvre action. The materiality of the sculptural model (and I would say that, to an extent, Asher is still engaged in a physical, material project) gives way to the purely conceptual in D’Arcangelo’s action. In this sense, D’Arcangelo achieves an incorporation and extension of the previous advances in sculpture, Institutional Critique, and language-based Conceptual Art.

The multiple contradictions manifested in D’Arcangelo’s practice are impossible to recover through the current exhibition model. Perhaps they are simply irrecoverable. The interviews at Artists Space present D’Arcangelo in various and often incompatible ways: he is a Foucaultian, a Marxist, a friend, a colleague, a legacy. Each of these readings, however, all of which merit consideration, provide only incomplete—and always motivated—interpretations of D’Arcangelo’s practice. Each of them also offers a valid entry point into a forgotten oeuvre. If we think of each interview as a piece of a puzzle, we ultimately realize that the puzzle might never be complete. And that uncertainty, partialness, and fracture were implicit in D’Arcangelo’s work from the start.