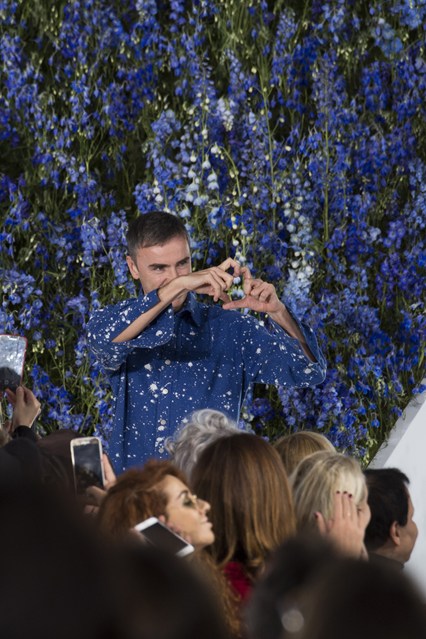 At the moment, regardless, the energy is at the centre of the brand
(archival YouTube comment on Vetements F/W 2016/17 Runway Show, March 2016, Paris)

Much has been made lately, in newspaper style sections and the blogosphere alike, of the fissures, anxieties and turbulences exposed in the glamorous and frenzied world of high fashion. The fatigue and exasperation recently expressed by industry players such as Raf Simons or Alexander Wang—both of whom rather abruptly fled high-paying, prestigious gigs at some of the most venerated houses last season—over excessive workloads, creative burnout or stagnation however seem curiously belated from the vantage of point of contemporary discourse.

Alleged conditions characteristic of post-Fordist labor such as creative exhaustion, self-exploitation, depression and jadedness have thematically nourished entire artistic careers and curatorial frameworks for over a decade. This was mostly by reverting to continental post-Marxist theory dealing with late capital and alienation first formulated in the 1970s which resurged in the noughties and climaxed in the financial meltdown of 2007/08, while these above-stated diagnoses coincided with contemporary art’s ascendance towards the social sphere of choice in top-down fashion; from high-net-worth-individuals to increasingly middle management, all eager to be entertained and supplied at fairs, openings and biennials by what Benjamin Buchloh once labeled the new Lumpenproletariat clad in Prada. [1]

The discourse—or cultural malaise—of late-capitalist alienation, followed by strategic complicity absorbing ineffective artistic autonomy and avant-garde criticality, was an evolutionary process from an art-historical perspective. In what seems like a cultural delay or echo, designers like Raf Simons who identify with and seek to branch out into the contemporary art world now have to contend with familiar predicaments—the Soul At Work et cetera—that have long plagued the professional bohème.

To the degree that some contemporary art endeavors can attain political agency, some high fashion craves believed-to-be-lost authenticity through contemplative avant-gardism as opposed to satisfying number-crunching shareholders and high-maintenance, luxury shoppers who grow impatient over the incongruity between proliferating Instagrammed must-have looks and high fashion’s antiquated concept/business model of a seasonal futurity out of reach for the 24-hour checkout basket.

Luxury brands with mass-appeal like Burberry, not afflicted by the art-fashion identity crisis, consequently have announced their logical next steps in doing away with this intolerable and growth-hindering state of affairs. Not only will mens and womenswear be folded into one show/collection but clothes will be available to shoppers on the spot, at the touch of a screen.
Curiously enough, at this point, the gender and sexual fluidity long propagated by several camps in the high fashion industry does not consequentially mean more product to shift, but rather exerts a streamlining and economizing effect on collections, arguably compensated for by focusing on the higher-priced segments of previously diversified lines along income-brackets, as such reflective of the ongoing eclipse and erasure of middle and upper middle class customers/citizens.

Enter the sartorial fuck you’s of Vetements that are of the anti-brand branding variety, which previously enticed fashion addicts to drop over 500 euros for a deconstructed hoodie that bears the appropriated logo of Champion sportswear—ironically the brand first marketing this proto-athleisure item—and slightly less for a yellow T-shirt sporting the red logo of the global shipping company DHL.

The trending label’s boisterous, vulgar and placative aesthetic, including sweats with messages such as “you fuck’n asshole“, seems perfectly reflective—what Walter Benjamin called fashion’s unique “flair for the topical”—of the populist know and care-nothing attitudes currently on the rise in developed consumer societies, eg. the obnoxiously confused Trumpism in the US or the new-normal Euro middle-class xenophobia, advanced for example by the so-called “Alternative für Deutschland” (Alternative for Germany) faction upsetting Merkel’s anti-accelerationist republic.
In closing their fall/winter 2016 show with Sisters of Mercy’s 1990 chart topper “More,” the label’s chief designer Demna Gvasalia has stated that he wanted to highlight his appetite for accelerated creative output, and indeed, commerce. Vetements in this regard also signals for the time being the definite end of normcore which the label has deftly appropriated so as to cannibalize and estrange it as stone-washed blue jeans, hoodies, bombers, varsity jackets, puffa jackets and sweatpants are being more or less drastically reshaped and disfigured.

1990 meanwhile, also represents Year Zero in terms of the rise of a unified Berlin as the capital of commercially uncontaminated and unbridled creativity and youth culture (the club Tresor opened in 1991, roughly coinciding with the opening of the Kunst-Werke exhibition space while the opening of the city’s to-date powerful galleries such as Contemporary Fine Arts, then Bruno Brunnet’s Fine Arts, and neugerriemschneider were soon to follow).

It is perhaps indicative of the Raf Simons fashion depression that the city’s gritty, non-monetized techno and street aesthetic of the early 1990s, which has always been associated with his brand (and to some degree with Helmut Lang), is now purely pastiche yet devoid of nostalgia. Twenty years later, Alessandro Michele’s gawky and affluent neo-glam Gucci kids aimlessly roam a beige-brown, orange and yellow capital apparently stuck in the 1970s in floral printed silk PJs, while Givenchy prefers to situate its tougher looks in yesteryear’s bleak concrete “poor but sexy” Plattenbau mise-en-scène around Karl-Marx-Allee. Hedi Slimane’s fetishization of LA’s vintage-boho set at the Hollywood Palladium for his final Saint Laurent mens collection F/W 2016/17—so perfectly ignorant of what else is going on in most high fashion—nevertheless represents merely another facet of the current trend of schizo-ahistoricity.

▲ Back to top ◄ BACK TO CONTENTS / MAY #15 ► From the same author Doors of Deflection, on Sam Pulitzer at Francesca Pia, Zürich in May #19 Mirror, Mirror On Da Wall… On the exhibition of Stewart Uoo, Galerie Buchholz, Berlin in May #13