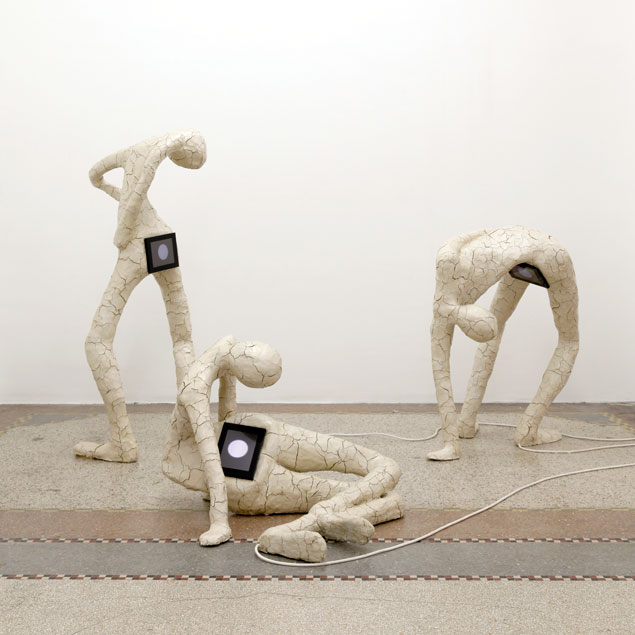 A gap has been bridged between Noah’s ark and Anthrocon, the furry role-play convention. An untitled painting in “Form Follows Information Exchange,” Jana Euler’s first solo exhibition at Dépendance, has two turtles in a water pond next to a couple of grizzly bears, gazelles and lions on the shore and birds on a tree branch. All of these creatures are seen in the middle of a weirdly synchronized mating ritual. Their postures and anatomies were probably copied from books of wildlife photographs, but Euler charges each couple’s embrace with human-like eroticism. Chins hover gently across shoulder blades, and to make sure we get the point, the animals have human faces. A movie equivalent to this sort of transfiguration would be the wacky editing technique where sex scenes are replaced with stock footage of (for example) pollinating bees, blooming flowers, humping rhinos, hotdogs and buns, a volcanic eruption (which also happened to be the subject of one of Euler’s 2006 paintings, Vesuvius), or a rocket launcher. A comedic relief that subverts not only potentially inappropriate graphic content but also prude sentimentality. Here, to the more occult aggression of “office culture” (the iconographic thread that runs loosely through the rest of the exhibition), this wildlife scene provides a pastoral kind of relief. A perfect safari photo opportunity. We’re still in a post-deluvian, biblical Eden, so maybe the animals still have to pretend they’re not interested in devouring each other. And the orgy is carefully choreographed into an allegory of fertile connectivity, reminding us that this primal scene is also, as the press release puts it, the primordial soup of “network configurations, data input and information exchange.” In this ecosystem, the most proactive specimens were selected, matched, and mobilized to breed and coexist in a matrix ultimately devoted to the reproduction and expansion of its whole. Covering the surface of the canvas in transparency, a pattern of white circles fades in and out of the foreground like a motion-tracking device or a set of user-friendly discussion bubbles.

Click the icon and it opens a new apocalypse: the exhibition’s eponymous piece is three filiform androgynous statues grouped together in a “video installation.” The clay-like surface of their atrophied muscles crackles like desert soil, drained to their last drop of life. Unlike the petrified citizens of Pompeii, stuck forever in contorted poses, what seems to keep them going are the flat screens that were transplanted up their behinds. A bionic augmentation that incites to stretch out and bend in an effort to keep an eye on trippy geometric animations. When it comes to consumer goods, flat televisions have yet to reach the rock-bottom retail prices that would make them widely and completely accessible to most. So eventually, this three-screens-per-head ratio would make the protagonists of the installation a privileged sample of the population. In ancient Mayan civilization, members of the wealthy elite would ritually bleed themselves in public in order to experience visual hallucinations (most often, a snake would appear in the bowl of paper in which blood was spilled).

The shrinking distance between each statue’s face and its technologically-enhanced bottom is just a few inches away from a perfectly continuous feedback loop; one that could easily be regulated, quantified and estimated like Bloomberg’s premium $20,000-a-year, x-millisecond headstart on the latest market fluctuations. Value gushes out of such gaps, when separatedness is monitored to keep connections productive. First, the complex, abstract nature of information has to be immobilized into separate packets, and then high-speed communication devices send everything in circulation. Between these two key moments of communication, between a source and a receiver, we could imagine an arrow stuck floating in midair (as in Zeno’s paradox, at an indefinitely re-calculated distance to the target) or even Keanu Reeves/Neo dodging CGI bullets, achieving a certain grace. A similar tension held the statues in position.

An even more suggestive vision was set in a non-descript gray-carpeted boardroom. The oil paintings The Emotions Discuss in the Postmodern Side-room About The Transformation of Their bodies (1 and 2) are like an indoors safari where humans (office workers, speed-daters, target demographics, or anonymous alcoholics) are seen in the act of face-to-face communication—naked, in a way. Jana Euler paints a chatroom in the flesh, like a bowl of apples. While the gigantic heads and faces appear “communicative,” the object of their discussion remains opaque. What matters of course is not so much the content of the exchange as its intensity, and that’s what we get to stare at: cacophony inscribed onto frozen faces. Lifted directly from an index of stock facial expressions (a vaudeville acting guidebook?) and then grossly deformed, a variety of headshots makes up this cast of “plain janes” and “regular joes” like a service-industry bestiary, completely trapped inside the emotions they mime. Each of them comes prepackaged with incorporated standards of emotion, available, usable and reproductible. The intensity of the scene then, doesn’t culminate from the chemistry of an unifying narrative but happens synthetically, out of discreet bits of energy. In the absence of that unifying principle, disarticulatedness pops out. In the same way that without a resolution or a punchline, the essential drive of caricature gets casually interrupted and starts wandering off its course, becoming less manipulative, one would even suspect an effort to identify more closely to a subject, blindly merge with it and make it seem “resemblant” or “realer.”

The first part of the diptych is plunged in the dark, as if processed through an X-ray while the second remains “au naturel,” with the lights switched on. But when it comes to their capacity to function digitally—as in “pushing buttons”—the paintings really drive the point home by hanging on a wall directly across the gallery desk (where daily transactions are usually executed)—in pace with the current shift towards a smarter concern for transparency in painting, over a century after Cézanne’s famous “I owe you the truth in painting.” As an “actual” technique, transparency was abundantly featured throughout the exhibition. Transparency of the additive kind, one that runs contrary to itself; in that it blurs out compositions and complexifies reading. But to restore “truth” or “transparency” would most importantly require a proactive kind of language, one commited to perform as much as (or more than) what it describes. At its most generic, self-reflexivity manages to expand like a gas, until its horizon of meaning devaluates into an intoxicated mumble, a raw utterance. “Paintings can absorb and carry along the networked conditions of existence that predicate and surround them.” Perhaps in Euler’s work, critical models like this one or derived from it consitute additional “standards of emotion.” Something like despair or a perversion that can be represented into a portrait. Or something that’s always here but one wishes it wasn’t, like self-awareness to a certain extent.

Around 2007, Jana Euler produced a series of minimal sculptures made out of continuous stems of metal welded at right angles into Sol-Lewitt-like cubical compositions. Rising from the ground, they’d fold back on themselves in a shape similar to the obscene gesture where one thrusts one’s index finger repeatedly through the other hand shaped like an “O.” The sculptures could be set in motion accidentally by a stranger’s “invisible hand,” or by bumping into them, causing them to start wobbling back and forth on themselves in a vaguely sexual way but without ever climaxing. The motion would naturally run out of steam and the sculpture gradually stabilizes after a while, as if bored. In the diptych, the seated bodies were just as frail and had a similar vibrating awkwardness to them (hollowed-out bodies are good business, but that awkwardness still gives them a radiating glare). The energy they spent speaking is lost in the feedback process and the exhaustion rubs off on the viewer—“I feel like my brain does not process a lot of things anymore.” Figuratively, they wobble too, between the naturalistic, expressive vision of “just another day at the office,” and a heavier, embodied allegory of “The Information Age.” Gravity comes in that lumpier expressionistic style, a global meltdown from the brain to the gut. In thermodynamics, the entropic dissolution of energy happens during the transformation of a state of being to another. With artists, this could correspond to the whole mid-career moment, between “juvenalia” and “late works.” The show at Dépendance is perverse and weird because it could exist alternatively on both of these disjointed poles. Like a chain of ones and zeroes—each time tantamount to a negation of everything else. 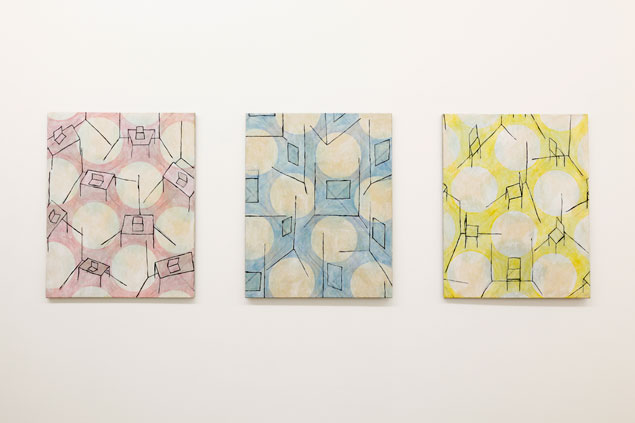