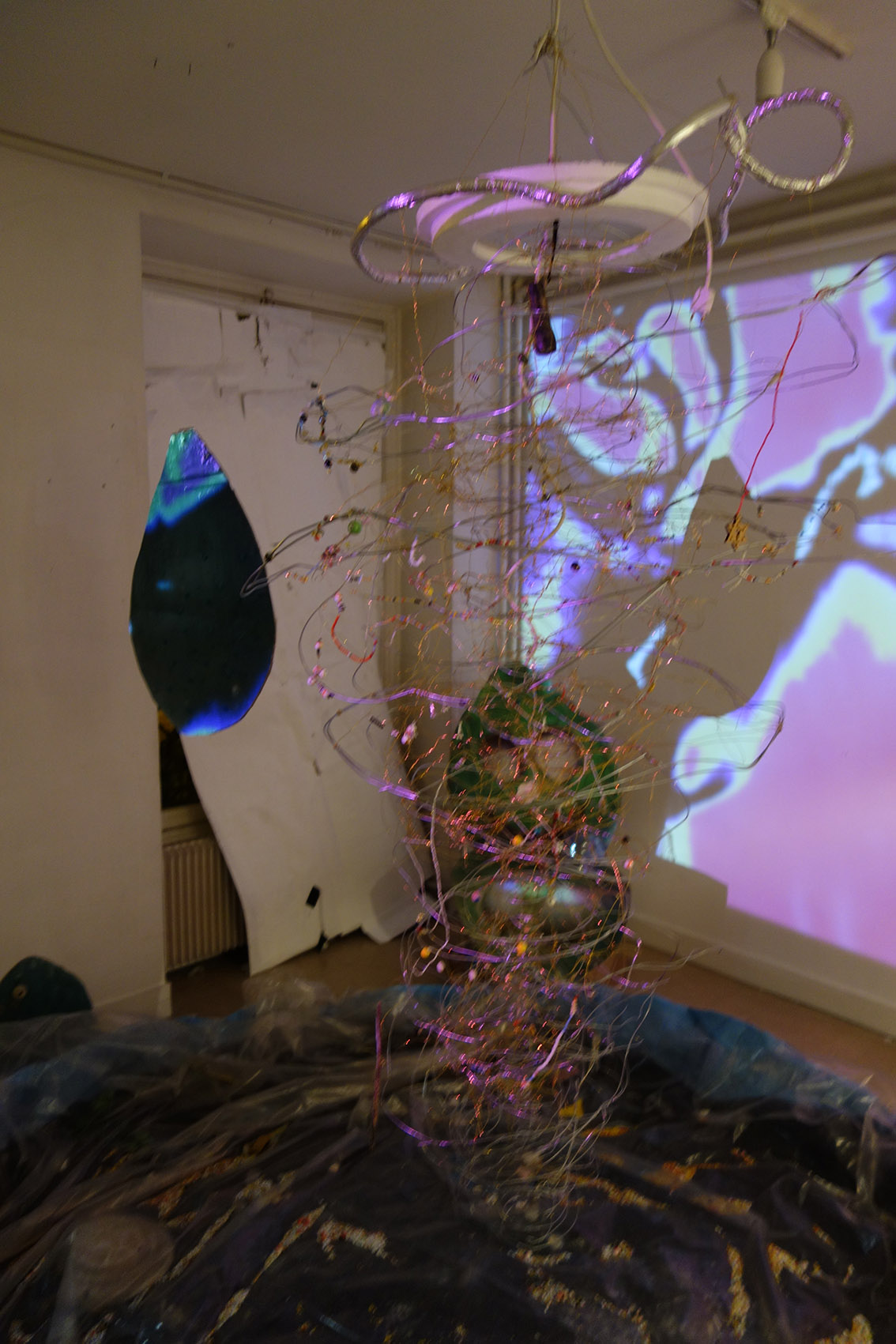 On a Sunday evening in October, May contributor Hélène Fauquet hosted the final installment of a series of exhibitions held in her studio residency-cum-project space at the Cité Internationale des Arts. As a result of the show being haphazardly publicised and scheduled in a lull before the beginning of a week of art fairs and openings in Paris, visitors were almost exclusively limited to those bonded by friendships and personal alliances. In this rarefied atmosphere, artists Eric Sidner and Ryan Siegan Smith stage MAGMA: a sprawling, immersive installation produced collaboratively on site, which originated from a prolonged period of discussion and exchange between the two artists respectively working in Berlin, Germany and Marsaskala, Malta.

Cinematic sub-bass frequencies, chattering, light cast by a video projection, scattered beads, chairs, sea urchins, a pair of eyes—what initially appears as a curious amalgam of disparate elements, is revealed to be a delicately staged environment, structured centrifugally around a spiraling chandelier made of wire, beads and cheap trinkets resembling a tornado, hovering over what looks to be an improvised kiddie pool or wishing well enclosing an unreflective black void covered in translucent plastic foil. An artificial garden of photo-sculptural representations of prickly pear cacti, scarified and inscribed like epitaphs, traces of passers-by—would-be comedians, tourists, evangelical Christians etc.—surround this central node. Encircled in this labyrinthine scenery, one wanders through the space along predefined paths as if it were a kind of indeterminate model architecture. With structure imposed through physical boundaries and deliberately framed vistas, the individual elements of the installation function more like stations than discrete elements: an altar-like structure, made of cinderblocks filled with lit tea lights, sea urchins and shotgun shells, demarcates a conspicuously empty zone; a box containing a dangling pair of eyes, a model tank and a light bulb resembles an empty puppet stage. Blades of shadow cast by repurposed window shutters—cucolorises for desk lamps taped to the walls—lend a noir-ish atmosphere to the space. The only additional light radiates from a video projector. A continuous montage is projected onto the scenery and bodies within the space: a square convulsive sun, a simulated liquid-light show, a revolving crushed head, a vacant domed stadium. With their shadows cast onto the back wall, those present in the space become unconscious actors in an obscure shadow play.

In accordance with the ambiguous, alternating movements of the spirals that constitute the centrepiece of the installation, the chandelier sculpture/prop that seemingly oscillates between symbolic and worldly poles, viewers are simultaneously drawn into the work and disgorged. It remains open to interpretation whether the structure of this object implies a tendency towards collapse or expansion. This sense of tension and duality pervades the work. As an arrangement of mostly found objects isolated from various, geographically distant locations—namely, the multiple sites in which the work was produced—MAGMA compels multiple vertiginous trains of thought. It is difficult not to be distracted by particulars that emerge from within this delirious mise-en-scène, especially since so many of the materials in the installation carry with them traces of their specific origins. In its evocation of parallel, disjointed realities, the work produces moments of discontinuity that sustain different modes of experience. As soon as one consciously begins to sift through the abundance of detail in the installation, one becomes aware that the synthesis required for an immersive experience depends largely on oneself as a viewer. Tracing the origins of the work, one may recognise, for example, the stadium in the video projection as the Houston Astrodome. The field, made of eponymously named AstroTurf, as if in some post-apocalyptic vision, lays peeled back to form gargantuan folds, revealing the bare concrete surface below. Once vacuumed by groundskeepers in space suits between innings, the artificial turf captured the American public’s imagination as an emblem of technological progress, one that was perhaps embraced by J. Edgar Hoover when he had it installed in place of grass on his front lawn. Similarly, the prickly pear cacti that are dispersed throughout the space evoke a multitude of associations. This species (Opuntia ficus-indica), which is native only to the Americas, has proliferated across many regions throughout the world, including Malta where it is particularly abundant. Rather than attempting to eradicate the cacti, the Maltese have adapted them to many different uses such as planting them to form boundary walls and distilling liquor from their fruit. In a period spanning the 1970s and 80s, they even appeared on the country’s coat of arms. These divergent narratives, which stem from conspicuously loaded elements within the installation, are ultimately united in airy tension in the image of a vortex. Although one may be drawn into the immersive spaces within the work and the multitude of potential narrative paths it lays out, its centrifugal/centripetal symbolic orientation inevitably brings one back to notions of the abyss and ideas of dissolution, just as a vortex simultaneously resembles a whirlpool and tornado.

While the work turns around the image of a vortex, the title, MAGMA, suggests the presence of an altogether different dynamic that brings to mind notions of lateral flow and continuous shifting. Unlike lava,magma typically flows underground and is almost never encountered in situ. As a volatile, heterogenous substance composed of liquified rock, suspended crystals and dissolved gasses,magma is full of dormant energy. If one were to take this title as an emblematic key to the show, it would resonate not only with the diverse, suspended character of the elements that make up the installation, but also with a greater, latent potential that results from tendencies within the work to embrace its audience. Although moments of immersion may be fleeting—not least because the scenery is visibly held together with hot glue and packing tape—MAGMA retains the power to transport. The sense of changeability present throughout the work’s many indeterminate and virtual spaces reveals an emancipatory drive within the work when viewers are cast as participants. The title, which evokes an image of a parallel, unconscious, subterranean zone, offers a glimmering sensation that the ultimate site of the work may reside elsewhere. However fugitive these feelings of potentiality may be, they lead to a significant question—what will be congealed out of this gathering?