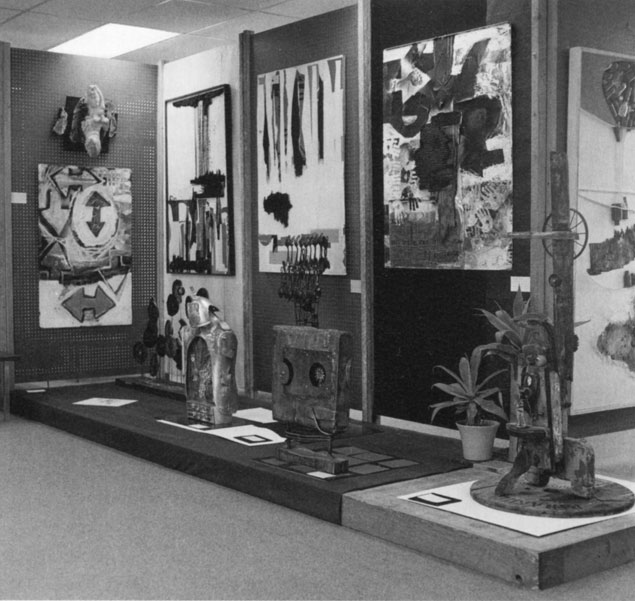 Topped with a photo of a burning supermarket, an unsigned essay on the Watts Riots opened the tenth issue of Internationale Situationniste (December 1965), Guy Debord’s glossy broadside of theoretical revolt. Outlining the situation from its inception in a traffic incident through to the subsequent looting and street fighting (“32 dead, including 27 blacks, more than 800 wounded and 3,000 arrested”), the article goes on to expose the motives behind the recent outburst of violence and rage. Titled “The Decline and Fall of the Spectacle-Commodity Economy,” the text pictures the Riots as part of a larger critique of global spectacle, with the next essay in the issue offering an analysis of struggles in Algeria. Located just south of Hollywood, however, the trouble in Watts had a particularly local valence as well. Lying within reach of the American dream factory, the Watts community was nevertheless denied its promises at every turn, burdened instead with unemployment, inflation, and police brutality. Tired of the situation, what “the Los Angeles blacks” did was “take modern capitalist propaganda, its publicity of abundance, literally,” the article claimed. “They want to possess immediately all the objects shown… because they want to usethem.”[1] It was precisely this emphasis on use, rather than exchange, that formed a “rebellion against the spectacle,” “Decline and Fall” insisted. To critique the spectacle, one had to create new social relationships outside and against its network of mediated images.[2] “Community, from which the rebelling individual is separated, is [both] the true social nature of man,” the article concluded, and “the positive supersession of the spectacle.”

Perhaps not surprisingly, a focus on community became increasingly central for a number of artists working in post-Watts Los Angeles, as the recent exhibition Now Dig This! Art and Black Los Angeles 1960-1980made clear. As signaled by its subtitle, the exhibition did not propose to identify a “black art” as much as it sought to chart out how art circulated within and helped define a black city.[3] In many of the works, the impact of Watts came through rather explicitly. In the aftermath of the Riots, the artist Noah Purifoy began picking up wreckage and detritus off the neighborhood’s streets. Along with Judson Powell, Purifoy headed a program in art education at the Watts Towers, the eccentric agglomeration of tiles and scrap that the Italian-American bricoleurSimon Rodia had begun constructing in the 1920s, and at first Purifoy and Powell thought they might put their collection of artifacts to use in the form of a “sculptured garden” there. “By September, working during lunchtime and after teaching hours, we had collected three tons of charred wood and fire-molded debris,” Purifoy later recalled. “Despite the involvement of running an art school, we gave much thought to the oddity of our found things. Often the smell of the debris, as our work brought us into the vicinity of the storage area, turned our thoughts to what were and were not tragic times in Watts: and to what to do with the junk we had collected, which had begun to haunt our dreams.”[4] With the coming of the First Annual Watts Arts Festival, Purifoy decided to mount an exhibition that would use this raw “as found” material as the basis for a collection of artworks, and he quickly enlisted a mixed race group of artists and interested parties to make them a reality. Taking its name from sixty-six assemblages created from the lead drippings of melted neon signs, the project eventually became known as 66 Signs of Neon. Strange totems charged with talismanic powers, the sculptures drew equally on the aesthetic of the Watts Towers, legacies of assemblage, and the tumultuousness of recent events. The very process of making the work was important, Purifoy noted. “The ultimate purpose of this effort was to demonstrate to the community of Watts, to Los Angeles, and to the world at large, that education through creativity is the only way left for a person to find himself in this materialistic world.”

Even though the sixty-six works in Neon bore resemblances to currents in art practice (one might think of the work of Rauschenberg or Wallace Berman, for example), they nevertheless parted from them by eliciting other forms of engagement. As condensations of historical events, they were more like artifacts than artworks, the unusual combinations of which provoked discussion more than contemplation. “The art works of 66should be looked at, not as particular things in themselves, but for the sake of establishing conversation and communication, involvement in the act of living,” Purifoy insisted. If neon shop signs stood for one form of communication, these odd objects suggested another.[5] Resisting a logic of spectacular surfaces, Purifoy’s lumpen formations proposed a less mesmerized form of interaction; such works, the artist believed, might uncover a form of materiality that would stand in confrontation with “this materialistic world.” As the SI suggested of the rioters’ actions, Purifoy, too, sought to use things literally by creating assemblages of “ordinary construction” and “free from exaggeration or embellishment.” The idea was that such a way of making might give rise to community by serving as a kind of model for it.

Due to a lack of institutional support, many of the sculptures reverted back to their original state after the exhibition and were left at the dump. Some works, however, such as Purifoy’s Watts Uprising Remains, 1965-66, are still extant. A thick slag of molten debris with an open Bible embedded on its top, the work derived its power precisely from its loaded yet remote quality. Emphatically obdurate and material, the work sat at the Hammer as a kind of relic dense with embedded information. One sensed a dialectical quality to this object as one did with many other works in the show. On the one hand, it belonged to history and yet, perhaps precisely because of this fact, it appeared both inaccessible and remote.[6] Sitting in a carpeted gallery, the work evoked the obdurate nature of the past. At the same time, one felt a strong desire to figure out a way to make it speak.

Strikingly, a strong sense of the resilience of materials—rather than the power of images—ran throughout this exhibition, which was surprising for a show ostensibly focused on questions of identity amongst a group of primarily black artists. Entering the exhibition one encountered a pair of works by the painter and teacher Charles White and the sculptor Melvin Edwards, which, while using different media, nevertheless stressed common interests. Where White’s Birmingham Totem (1964), an ink and charcoal on paper work of a crouching boy perched above a mountain of scrap, conveyed something of the melancholy of the Civil Rights movement, Edwards’s The Lifted X (1965), a powerful, if stalled, mechanism rising from a pile of cast-off parts, communicated a similar sentiment via other means. Devoid of figuration, most of Edwards’s sculptures appeared less like muscular exertions than they did scarred and introverted accumulations of detritus. His continuing series of Lynch Fragments, which the artist began in 1963 and still makes to this day, do not communicate the violence of the African-American experience in any direct way, but rather convey the force of violence—and perhaps even of boredom—in their thick accumulations of welded steel. History inheres in these objects in complicated ways. The end result is often a dense mess that almost appears too heavy to hang on a wall. Such an effect is brought to a head in Cotton Hangup (1966), a sculpture that much like Tatlin’s Corner Relief (1915), attaches itself to two walls and the ceiling of a room, activating the space with a murderous latency. Indeed, many of the other works in the exhibition addressed the viewer in similar ways, incorporating processes of accumulation to new and surprising ends.

Senga Nengudi’s Remembrances of RSVP (2011), for example, had a space-grabbing quality similar to Cotton Hangup but achieved this effect with a different, if not contrary, materiality. Exchanging Edwards’s heavy steel for the lightness of a pair of stockings, Nengudi’s ephemeral, expendable work seemed engaged in a kind of frenetic dance that it refused to take part in alone. Evoking something of the movement of Nengudi’s own performances, the work’s title emphasized the work’s desire for a viewer response but, in doing so, it invited one into a nebulous space. The work invokes terms only to dispense with them: the body is conjured but absent; skin color creeps up as a ghost; the timelessness of the art object is undermined by its incorporation of cheap things. (Since many of Nengudi’s works from the 1970s no longer exist, the artist made a number of contemporary variants for the show.) What was striking here was the way these works escaped the trap of an essentializing identity through their deft reference to the most superficial aspect of race: the color of one’s skin. These works literally objectified identity by transforming it into something that could be stripped off. In their unusual combinations of material, they seemed to propose that another kind of (social) body might take its place.

Though suggested by Nengudi’s practice, the antecedents of what we typically think of as art dealing with identity politics—work by artists dealing with the critique of representation who came to prominence in the 1980s such as Carrie Mae Weems and Glenn Ligon—appeared most clearly in the exhibition in work by Betye Saar and David Hammons. For these artists, a negative self-depiction, an image of one’s people as seen by the dominant culture (a kind of community formed in negative), figures as the necessary point of departure. Saar’s Let Me Entertain You(1972), for example, takes the derogatory image of the minstrel as its starting point, placing it on the left of this tripartite work.[7] In the second segment, the image is transposed on top of a picture of two lynched men, layering a fictitious character on top of a documentary image of history. In the final component of the work, an androgynous black figure stands in front of the colors of the black nationalist flag, striking a pose similar to that of the minstrel except that s/he now holds a rifle instead of a banjo. The figure is ostensibly empowered, but the similarity to the minstrel pose makes one uneasy. As such, the work asks questions about the dangers of representation in general. One sees that positive representations can quickly become caricatured as well.

Hammons’s work takes part in a similar yet ultimately divergent investigation from that of Saar’s. Working with derogatory clichés historically associated with black culture such as the wino (The Wine Leading the Wine, 1969), and playing on verbal epithets like “spade” (Three Spades, 1971), Hammons’s works are often blunt and literal-minded. Though the artist, inspired in part by Purifoy, went on to work in assemblage, the body print was his key technique in these years. Covering himself in margarine, Hammons impressed himself onto pieces of paper and then sifted graphite powder over them to make ghost-like impressions. Differing from the similarly indexical medium of photography, the body print lends itself to odd distortions, foregrounding the obtuse materiality of the subject, and allowing the artist to recover the split between the specific body and the generic slur. For Hammons, the idiosyncrasies of the body can never be reduced to any linguistic sign—whether it is that of the “spade” or the drunk. The body is always in excess. The same might be said of Nengudi’s work as well. What was striking about the exhibition at large was that one saw how an emphasis on materiality could similarly achieve a resistance to identity as traditionally understood. Labor, the very act of making art, was foregrounded throughout the exhibition, and so too was an emphasis on building community—that old forgotten relative to the social network. Indeed, the community that was constructed in the exhibition was more than a museum of the artifacts of Black Los Angeles, but a model state that proposed new counter-modes of conversation for today.

▲ Back to top ◄ BACK TO CONTENTS / MAY #8 ► From the same author In Fashion. On Josephine Pryde in May #4