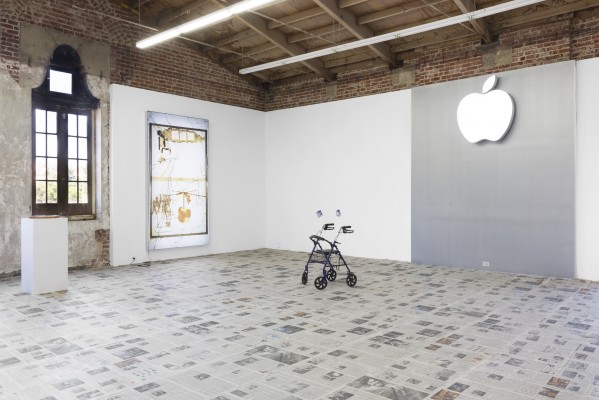 Happy For No Reason

Happy for no reason, yes, for what could possibly be an authentic reason to
be happy in 2019? Like an opioid addict, one is happy for no reason except that
for the moment, an addiction tenuously preserves sanity or its semblance. And the
questions of what precisely sanity or sense-making could mean in the present is a
theme that resurfaces relentlessly in this exhibition at Gaga & Reena Spaulings
by the duo Claire Fontaine, founded in Paris in 2004 and comprised of artists
Fulvia Carnevale and James Thornhill. Images refracted through cracked
iPhone screens provoke us to question whether sanity is to reflect, perhaps
obsessively, on the fracturing of the apparatus, in this case, through which we
view the increasing virtuality of society-become-image as a symbolof the brokenness
of society itself. A roulette wheel spins in the center of the room without ever
landing, provoking the thrill of a moment in which “all bets have been placed”
(Rien ne va plus, 2018). We can only wait against our will, in perpetual
suspension, perhaps consoled by the fact that the game is not yet over, even in
the midst of ongoing catastrophe. Several works offer yet another strategy,
suggesting that we might repair our relationship to society by investing in the
struggles that have emerged to emancipate us from disintegrating patriarchal
structures of sense-making. In this show, Claire Fontaine powerfully embraces
the undecidability between these survival strategies in the midst of the inherently
ambivalent political reality in which we find ourselves.
We live in a time of affective chaos, in which the most basic ways in which
we might make sense of the world are scrambled, foreclosed, and obscured.
So suggests The Luxury of Making Sense, a sculpturalized text pile comprised
of texts of the same name for distribution. In this work, Claire Fontaine
describes the erosion of the individual’s capacity for empathy, the ability not
only to relate to the suffering of others but also to feel the experience of the
other within one’s own body:

The latest research has proven it: mirror neurons are responsible not
only for our empathy but for our capacity of feeling things that we
watch as if they were happening to us, or as if we were the ones doing
them. We don’t need to be told that people are in pain to feel the urge
to help them when we see them suffering. The reason that prevents us
from doing so is the same one that discourages us from thinking,
experimenting, being courageous: we can’t afford it [1].