On the film Shakedown by Leilah Weinraub 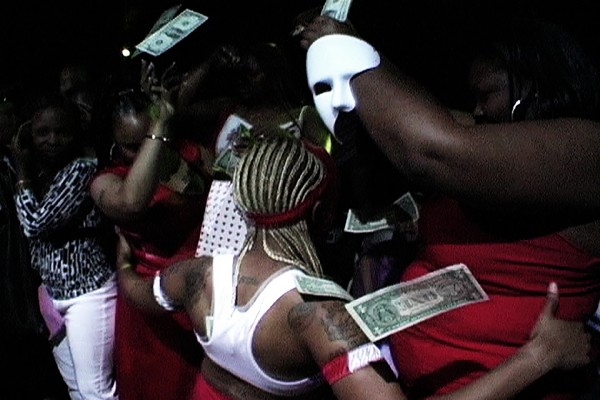 A solid scarlet red fills the borders of the cinematic frame, simmering
organ-like chords into ascendingly burbling horns that seem to declare it
has begun.

“THE SHAKEDOWN ANGELS (IN ORDER OF APPEARANCE)”

Tall, thin, white sans serif titles fade all caps into the frame, ushered by
the efflorescence of the score. The film introduces each of the Angels by name,
then Miss Mahogany, the Stud Performers, each of them by name, Security,
the DJ and the Owners:

Now, a number-sequenced “LIST OF SCENES” with titles like “ISSUES
IN THE HOOD,” “FREAK – A – LEAK,” AND “UNDERCOVER COP
INTERLUDE.” It wouldn’t seem unreasonable to expect a video album from a
wittier Knowles sister, albeit with notably different and queerer motifs. Shortly
after the index appears, a PA voice floats over the scarlet and white frame,

Ronnie Ron, the “stud” proprietor of Shakedown Production, laddishly
encourages the crowd to praise and pay who we can only presume to be one
of the featured dancers, yet-to-be seen.

Our next performer coming to the stage right now, right now, right now …
This is the wild side of shakedown… She’s [the] special guest performance …
Then another battlezone is comin’ at you. Remember, we are sponsored by none
other than the LAPD in this bitch … So watch yo’ self …

This tongue-in-cheek gratitude for the LAPDs sponsorship and its subsequent
warning play over:

“A FILM BY LEILAH WEINRAUB”

As this final credit transitions to the first moving image, a grey couch
in front of a white wall with the fuzzy silhouette of camera equipment in the
foreground, Ronnie’s voice continues “do we got those props up? Somebody let
me know …”

Shakedown the film has commenced as Weinraub enters the frame and
tests her audio equipment. In the less than 2 minutes expired, this opening
sequence has centered labor, its recognition, its praise and its payment—these
concerns are both part of the stripper economy of Shakedown Production and
recompense for decades of voyeuristic cinema that has treated black subjects,
particularly queer black subjects, as pathologically naïve muses with nothing
to offer but “content” for portraiture. These are artists, producers, and entrepreneurs
whose practices are exquisite and embedded in a system in which
anyone doing their job wants to know—as one later-in-the-lineup dancer
inquires before her set in one scene—they got any dollars left for me?

The combination of interviews, archival footage and promotional images,
propelled by a loosely historical narrative, is by most definitions of the documentary
genre. This is not “Paris is Burning, but lesbian” as I heard an
acquaintance crudely describe the film, … but a sort of acute experiment in
which Weinraub uses the formal tropes of documentary and essay-film to
create a poetic space in which we are able to see—to peer into the world of
the Shakedown vividly.

The film moves in something like chapters, each with an organizing
moniker MONEY, LOVE, POWER, etc. that animates the portrayals of the
characters introduced therein. Among the most striking visual elements of the
films ephemera montages are the flyers and promo cards
from various nights. Without this film, the larger public would never see
these materials, and in the case of Shakedown, this was intentional. Ronnie
establishes that the Shakedown management avoids magazines and publicity,
largely due to the contingently off-the-books nature of the venues the nights
take place within. At the same time, everyone is working. The idea that the
promotional imagery and ephemera tied to the night would carry an
esteemed cultural currency later on is not a particularly pressing or present notion to
any of the angels and crew. In that respect, Weinraub is doing the work of an
anthropological archivist, but one working from within, and one who takes
privacy as central to the endeavor. The flyers are playful, costumed, cheeky
and theatrical testaments to what the nights at Shakedown activated.

The term queer feels ineffective at getting at what Shakedown has. Many
of the scenes in which stud and femme performers narrate and give insight into
the characters and dynamics of their dance sequences serve as apt models
for identity-in-praxis in ways that seem ahead or at least outside of current discourse,
which often positions the very notion of a binary as mutually exclusive
to fluidity, negotiation and contradiction. Shakedown auspiciously comes at
a time in which the category of ‘woman’ seems, in itself, more a call to define
and police what it isn’t than to celebrate what it is. When Ronnie instructs
the club patrons to watch yourself in light of the always-present threat of the
LAPD, it’s simultaneously a call not to replicate cop structures and tactics.

How can one be protective and productive of a black, woman, and lesbian
space without policing the boundaries of its perceived “essence”?

Ronnie’s voice is enthusiastic about the crowd’s ability to manage itself.
Ronnie encourages the all-black and mix gendered (though mostly women)
crowds that come to Shakedown to police themselves, girls to the front, respect
the Angels and Studs.

The sex and gender taxonomies of stud/fem woman/man gay/straight
that the very notion of Shakedown depends on, are animated and put into
work by the linkages and dynamic relationships between the characters of the
film. The boundaries of a gay woman’s space are not established via a preemptory
fear of who might contaminate its essential makeup, but by establishing
a respect and deference to the women who rightfully take it up of their own
accord. Egypt, perhaps the most central Angel of the film, describing her relationship
to drag performances and the spaces, recounts:

I take a lot from a drag queen. Its funny because I get a love from that
side, as far as the gay men and the drag queens […] Like I can actually go into
a club and perform with drag queens without exotic dancing and it’ll carry
… I’ll make sure the makeup is more extravagant the hair might be up here
the costume hanging down there. Everything is more, but I’ll do it my way.

Shakedown’s early history centers around the influence of Mahogany, a
pioneering older woman, who happens to be trans, and is considered a “mother”
to many of the lesbian dancers and herself dances in spaces by and for women.
She mothered Ronnie, many of the young Angels, and Studs through the
balls she put on in Inglewood, which had categories for the expression of
female masculinity and gay female femininity. Even her foray into dancing
for women was a slippage … a bra that came undone in a room of gay women
… the rest is Shakedown history.

What the roster of the film seems to take for granted is the joy with
which the categories they operate under are deployed … Ronnie became “a stud
image … [she] was fem at one point.” Recounting her journey from Jehova’s
Witness breakaway to Shakedown Production CEO, she says “When I came
into the gay scene I was more of an aggressive fem … and then my image
became more of a stud … A stud to me is a female that looks like a man.”

My favorite dance sequence in the film comes by way of Slim, who Ronnie
adoringly suggests could “do whatever she wants. She puts on the mask and
veils herself … she’s just a cool motherfucker.” Slim, who is known for playing
with both stud and fem elements in her performances, splits the crowd
entering the dancefloor with reptilian, hunter-like moments, wearing a (presumably
male) firefighters’ uniform and smoke mask … eventually disrobing
to reveal an early ‘00s fire print tank top thong combination and thigh high
boots. Slim’s performance is magnificent, and its eerie play with the danger
of gender contamination is amplified by Timothy DeWitts score.

DeWitt provides the soundtrack for most of the dance sequences and transitional
scenes of the film. Each dance sequence borders on surreal, a visual
and sonic palimpsest with gut-like bubbling percussion and chimes following
the movements of the performers, the original r&b and hip-hop melodies
lingering anxiously underneath DeWitts score. The choice to score the
dance scenes seems less about hiding the scene’s original context in experimental
abstraction than to protect and preserve the tenderness, vulnerability,
and affect in something that serves more as a kind of sonic translation.
Who are the audiences watching the film and in what way can they also see
Jazmin, Egypt, Slim and crew outside of the connotatively anthropological?
… I suspect it has something to do with what Weinraub had Egypt recite at
the end of the film:

Nothing is what it seems from the outside
and from the outside things look pretty much the same
In L.A. there are strip malls, brown buildings and concrete streets for
miles stretching in all directions
Palm trees and cars
At night its more of the same but less fight and less cars
Some places are just hard to find

I suspect Weinraub thinks it should stay that way …