The Apersonal Affect. On Anne Imhof’s exhibition at the galerie Deborah Schamoni, Münich 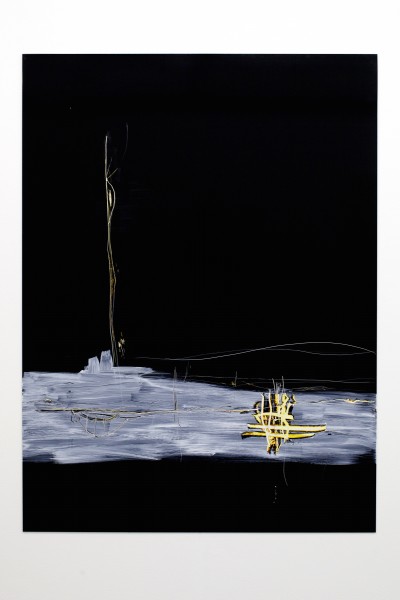 This is an aestheticism. It expands without thriving for a prospect. And it is exactly this, which renders its expansion the more aggressive. It does not justify itself in measures of progression. By way of art it aesthetically forces through a lifeform that does not keep its contemplative distance, but always seems to get a bit too close, without any intend of touching. Anne Imhof’s art, her drawings, etchings, sculptures, installations and performances, which from May to July 2014 sprawled across the two floors of Deborah Schamoni Galerie in Munich, extending over the staircases and into the garden, emits a sense of affective physicality that renders all feelings, all emotions, all thoughts and all language, as affects; as forceful somatic bonds. A desire not directed at the viewer, but at nourishing its expansive stance. In that Imhof somehow enacts what writer Kathy Acker once laid out as her take on writing as a form of “body building,” an artistic procedure which body-strips reality as much as art in order to exhume from it another form of body, another sex, another stance; in Acker’s as in Imhof’s case an aggressive aestheticism.

In Rage, a performance that can last from two to four hours, and was premiered at the opening weekend of Imhof’s show, seven performers, including Imhof herself, were sitting on and moving across the gallery floor and into the garden, in slow motion directed towards one another, performing choreographed banal operations under sulphuric yellow light when not repeating a varying sequence of words together. This was not a theatrical set up, quite the opposite: the bodies were moving across the space, but mostly they were crouching, their attire was similar in style, but not uniform, their voices were distinct, but not expressive and their faces remained withdrawn and repellent. This was not a demonstration, but the female and male actors in jeans, sneakers, hoodies, shirts and sweats averted to us were intensifying their own space in the room. They shared this proximity without touch that returns in so many of Imhof’s sculptural and graphic works in the show. Bodies built by enhancing approximations, here paired with a streak of symbolic language, sequences of words, which reappear in some of Imhof’s drawings. They are repeated in a choir form, like an unstable series of incantations, which heats up and abates, and which, again, does not address us but expands by repetition. We could be its objects, its implements, but not its subjects, its agents. But this also goes for the performers themselves, for Imhof herself. Affects are personal, but not individual. The question of agency is generally rendered as an, again, thoroughly corporeal, antagonism throughout Imhof’s works. Her “body building” is not a constructivism, but a series of aesthetic exposures, instances of acting out libidinous pressurized relations which are stabilized into a consistent performative grammar. In Rage the proximities altered throughout the duration of the performance, they intensified and dissoluted, evocating the hierarchical structures, of dominance, of cornering, of submission, of exposure and of unwanted address, until reconvening in a shared posture of intermediacy, sitting, crouching, lying and leaning. In Rage agency is physicalized rather then personalized, as in the yellow light that lies heavily on the scenery, as in one of the chorus’ wordings “lower the horizons, all the horizons…” Imhof here staged a shared but thoroughly denaturalized existence.

This sense of an agency that builds from the denaturalisation of (human) relations returns in many of the works in the show that was built around the performance. But the shared sociality of the performance changes its character in Imhof’s art objects: it is singularized, broken down into peaks. Imhof’s etchings on dibond, her sculptures and pencil, charcoal and pastel drawings are corresponding in the character of their mark making: a visual grammar of bruises, of scratches, holes, body parts, appendages that appear as exhumations from a before implicit streak within our social order that here comes to a full aesthetic life. Imhof’s works are physical without being expressive, affective without being sentimental. The alabaster, granite and clay tongues rising from the floor, out of a tray of buttermilk, and from a black box, are severed from their use for communication and here return as fleshy, offensive, libidinal organs. They re-appear everywhere in the show and set its tone towards the viewers, which Imhof refocuses in each of her media. Her most painterly works, a series of large black aluminium dibond panels, shown on the ground floor of the gallery, are each marked with an etching, a delicate drawing on pelvis height, reminding one of the vandalizing of upscale cars that is equally bruising the lacquer with a series of, beautifully flowing lines alongside the surface. And as much as car scratchings are distributed actions, their appearances in a gallery space isolates the elegance they produced, the desire they enacted, their libidinal value. And here, their titles, “Pleasure” and Horizon”, underline and poeticize this allusion.

And such beautiful brutalities return in many of Imhof’s works. Via her show at Deborah Schamoni, one could in fact reinterpret the discourse around the deskilling and reskilling in contemporary art that has been resurfacing in the last years, debating if conceptual artistic practices have fundamentally displaced artistic virtuosity in favour of subcontracting on the one hand and demystification of artistic agency on the other hand. Because the skills Imhof seems to evolve in her works are re-mystifying, but they don’t mystify art, but rather specific sub-cultural and clandestine social relations. Imhof extricates virtuosity from the bodies, from her group of performers, from banal tools like the toothbrushes, which appear animistically in her sculptures, from less banal ones like the strap-ons, which appear in some of her drawings. The mysticism which arises here is the aestheticism of another body, another sense of proximity. Again, Acker’s “body building” comes to mind, bodies built from affects that are not translated into socially identified and acceptable feelings, that are socially not deemed “productive,” but rather, as Lee Edelmann[1] writes, “antisocial.” In Acker as in Imhof it is those bodies, which are built and expanded. In her drawings this relation might be the most drastic, because the medium is the most genuinely artistic, the most prone for “artistic expression.” In a small room on the first floor of Deborah Schamoni Galerie, Imhof built the Cabinet for Rage. It contained four plastic wrapped palettes of Red Bull, a wall size diagrammatic drawing on bourette silk disseminating structures of Rage, two sculptures, one a sort of brace connecting two small clay forms and one a blackened toothbrush wrapped in acrylic, entitled Cobra, as well as four smaller drawings. One of those drawings specifies the annotations to Rage, while the three others seem to delve deeper into its personages. On one the human figure is lying, on another one it is crouching and on the third two standing figures are leaning towards one another. This last drawing, a portrait format, framed, with a small clay cast attached to it, and a square of dark blue paper obscuring the view onto the upper bodies of the two figures, shows to slender, feminine bodies. Their faces are obscured by long hair. They wear strap-ons and, while they are leaning towards one another their sense of proximity again is vexed. While the bodies are nearly identical and drawn over one another in parts, the hands are bending away. On the upper part of the drawing the blue paper shows a machinic composition in pencil and marker, lining out the figures, but also complicating their forms with holes and elisions. On the lower part of the drawing a marker-drawn blood red line, with an object dangling from it is separating the two. Imhof shows an affective vicinity that is intensified not by uncompromised harmony, but by obstruction. An intensification of a point of touch that is no longer banal. Imhof exhumes a libidinal relation that is recomposed by accentuating its dissemblances. As in Acker’s case Imhof’s is an aestheticism that expands via concentrations of brutalities and disidentifications, via their affective artistic affirmation and proliferation. Her show at Deborah Schamoni did thus not offer a subjectivized and expressive artistic signature, but a very powerful individuated structure of performance, objects, and drawings, which proposes an infinitely expandable affective aestheticism.