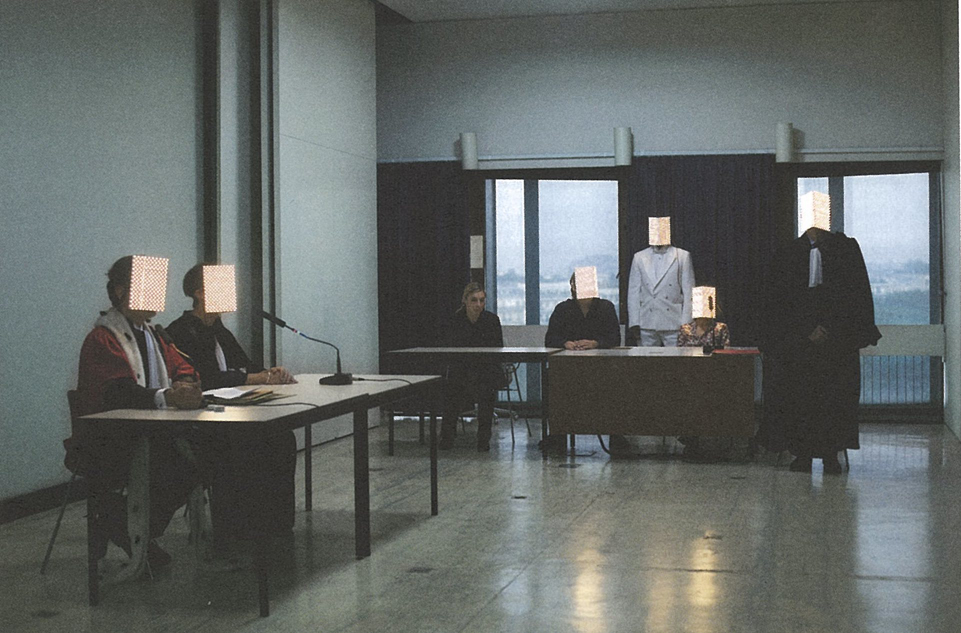 A talking rock. A woman of stone with a honeycomb head. A spider whose image is deformed by its aquarium. A dog who looks like a person but refuses to let anybody pet it. A 3-D girl, with eyes that are a little too blue, asking who she belongs to. A marionette made in the image of the artist talking to a marionette of Le Corbusier. A memory of the flickering lighting of a Kunsthalle. A skating rink which highlights all of the skate traces. A pebble sitting ready to scratch the museum wall to uncover a layer of green underneath, reminiscent of an installation by Guy de Cointet.

Elsewhere, a knighting ceremony is taking place following a speech in defense of image rights. A party is being organized in a little American town with a real deer, a real Bambi. Apparently, in the new configuration of the show, the partition walls of the posthumous retrospective of Mike Kelley—who was seriously traumatized by Walt Disney—have actually been conserved.

A Swiss ceiling spotlight goes out again. People with headlamps on go forward through an artificial jungle, and there’s that dog who refuses to look at me again! His master wearing a book-shaped diode mask is able to interact with him and takes him further away. We already saw this man during the court hearing. I think he was a judge. It was before the computer-generated rabbit went down the hall.

Everything has been mixed up. Why is this guy in a skirt looking at me while it’s snowing outside? I am trying to make sense of all of this.

What hides the face of the judge also lights it up! In reality we recognize him in this way underneath the anonymity of a lit-up sign in an ironic inversion like that of the exhibition walls whose screws are deliberately left visible. Unless this is a mark of their recent history? These traces on the skating rink, the scratch marks on the wall. Is this a retrospective on trial? A kind of mirror effect of the questionings of Ann Lee, who, unlike the prehistoric-looking animal deformed by its aquarium, had no history. If the amphibian belongs to its aquarium, does the exhibition belong to its walls? The marionette of Pierre Huyghe to a video? Can’t the exhibition be summed up through the appearance of one piece only? Don’t these characters, who come free from the works they belong to, to walk around me, resemble Disneyland characters? Byproducts? Entertainment?

This is not what is so disconcerting. Pierre Huyghe has always portrayed a world in which the films that adults most often go to see are interpreted by (reactionary) superheroes of the 1930s, presented to us as being new. Something else shows through.

By using his pieces as material to remodel, Pierre Huyghe embraces a world without hierarchy in which images and sources (Wikipedia/Leak – YouTube/ Porn) are treated in the same manner: the exhibition, the pieces, the characters, including him. In this way the artist eliminates any didacticism of approach in order to make way for the unknown. Through this process, the popular imagery that runs through the exhibition becomes as scientific as a laboratory for oceanographic research. The works, with their expensive production means and grandiloquent methods borrowed from Entertainment are reexamined from all angles. They have no more value than a speck of dust on a pebble, their mannerisms mellow.

There also seems to be a reversal of causal relationships: In a sense, the decors and the ideas no longer exist before the projects. The dog appears after the film, he knew the woman with the honeycomb head and now flirts with the man wearing the diode mask. On the other hand, beyond the fact that something hinges on the memory of previous projects, the retrospective character of the exhibition has been abolished. The latter, rather than using reason and rendering its practice more understandable or communicable, produces a new feeling in which one literally chooses which path to take in a labyrinth of pieces.

Moving through the exhibition one perceives that the pieces that one recognizes have changed in nature through contact with the others and are muddled, polluted. They have lost some of their former autonomy and effectiveness and given way to more open-ended forms and combinations like a musical score played freely by someone who knows it so well that they can attempt to reinvent it to the point of forgetting it altogether. By using his own practice as material for new productions, Pierre Huyghe creates a fresh and faltering laboratory / exhibition / body of work in which, much as in the practice of a young artist, everything can become brutally transformed in an instant at the sight of an unfinished display wall.

There is perhaps some kind of stuttering here, whose mechanisms and the complicity maintained with these, are reworked to feign a new belief, broader on another level, between the relations pre-established by the viewers and all the pieces. The artist and the viewer are no longer at the center. The body of work appears as an opaque “whole” whose different interconnecting parts cannot be dissociated. The relationship to the works is no longer authoritarian, democratic or participative; it is simply in the world’s image: non-reducible, malleable, and subjective.

When I was leaving the exhibition, I thought I had an idea. Why does Pluto belong to Mickey? A dog belonging to a mouse? Why doesn’t he have the right to talk when Goofy is allowed to talk and wear clothes? And why not organize a fake courthouse presided over by children where real lawyers would attack Disney for discrimination and the creation of a caste system between its characters?

I brooded over everything I had just seen. The exhibition, through its association of ideas and themes and its structures to be organized, had stimulated me. That is surely the essential role of an exhibition. We leave with the feeling that we have just played Trois petits chats.[1]

Translated from French by Patricia Chen