On Free Wifi by Nina Könnemann 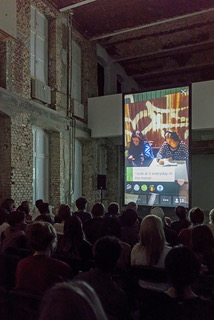 On September 17, 2017 I accompanied a few people to Nina Könnemann’s Free WiFi 3 at KW, Berlin—an event that might be described as a performance in the format of live streaming.

A large vertical screen in the proportional shape of a smart phone was hanging in front of formal rows of chairs. A second, smaller screen could be seen in the right hand corner of the room. During the event of circa 60 minutes, an unspecified amount of participants at various unknown locations around the globe (or at least between Los Angeles and Berlin) with access to free WiFi were logged into an app called Periscope, and their feeds of live video streaming or typed comments were mixed in situ by a sort of veejay. The result was projected on the vertical screen in the app-formatted collage of moving image, speech bubbles, and occasionally animated emojis, such as floating hearts.

The locations of the participants varied: McDonald’s, outside an Applestore, on the Staten Island ferry, the shower of a public beach, to name a few. The veejay was present and visible, and on the screen we could see her select from a list of participants named Kekkamak, oddgalloway, or Al Bundance. Other (presumably) off-site commentators were writing messages in the live stream, discussing for instance minimal lifestyle, digital nomadism, or counting napkins. Könnemann herself was at an undisclosed location—participating via Periscope—but without an overview of what we were seeing.

Multiple levels of perception and orientation had to be deciphered: Is this live? Is this scripted? As a viewer, am I supposed to be entertained? Can I leave a comment?

After some time of banal, voyeuristic or surveillance-like scenes and seemingly unfruitful screen chatter, some people obviously felt duped and left. However, as time went on, more elements became present, including the Wahrnehmung of time, space, and the teetering shift between what one might consider staged or spontaneous, private or public, real or virtual. Tensions played the boundaries of most viewers’ attention spans, which have become deeply shaped by constant stimulation of current technological communications.

Live streaming online is first attributed to video-hosting platforms like YouTube, where it was seen as an internet-based response to live television. The earliest live stream platform for personal use appears to be Ustream.tv, founded in 2007, whose developers were inspired by the challenge of American soldiers stationed in Iraq to communicate with various friends and family members simultaneously, since their free time and Internet access were limited.[2] Periscope wasn’t launched until 2015, when it was developed as a sort of street-journalism or moving image counterpart to Twitter. Since then, live stream is hosted on any number of platforms.

In her essay, “Inhabiting the Interface: The ‘mixed reality’ of Satellite Communication,”[3] Kris Paulsen frames a discussion around the new real-time image of earth broadcasted from the Apollo 8. “You are looking at yourself from 180,000 miles out in space,” the TV announcer stated. Satellite technology, both in terms of television and space-race innovation, created the phenomenon of the so-called live image broadcast. Already in the 1970s, researchers and companies were seeking to collaborate with artists in exploring the possibilities of a utopic “global now”[4], where far reaching locations could be linked via satellite, which quickly exposed the boundaries of connectivity. documenta 6, for instance, featured a “world-wide opening,”[5] where three artists were invited to present a 10-minute program respectively. “Television is putting itself at the disposal of video art, merely as an instrument of communication,” the announcer explains. Nam June Paik starts out by placing an empty TV box over Charlotte Moorman’s head, then a gas mask, a speaker, as they greet prominent watchers in Boston, New York and Moscow. He goes on to construct a feedback loop recording of a Buddha, which in the framework of the broadcast points to the absurdity of technological syntax more so than the connectivity of disparate parts. He also uses a video camera to play the piano; technology becomes an awkward replacement of the human hand while at the same time recording an otherwise unfamiliar viewpoint of the keyboard. Joseph Beuys, in the following sequence, addresses the audience much in the way a world leader might speak to a TV audience. In Douglas Davis’ third segment, the artist actively addresses the interface of the screen between himself and the viewer, suggesting a participatory exchange, which makes the immutability of the technological apparatus all the more evident. He incites frustration as a way to make the viewer a subject, and not a passive pair of eyes. In Free WiFi, the promise of the live stream, in contrast to Periscope’s own emphatic suggestion to “discover, what the world sees right now,” is exposed as a platform for sharing moments of precarious boredom.

The ‘mixed reality’ discussed by Paulsen might also be traced to presatellite works, such as Originale (1961) by Karlheinz Stockhausen and Mary Bauermeister, two artists who created events that dissolved boundaries of performance, music composition, improvisation and performer/audience role-playing. In Originale, a score laid the framework for progression, however the participants could freely interpret their own roles, which lead to interventions[6]. For Free WiFi, Könnemann had certain participants work from a script, whereas others were given more general cues, and since various open-access app platforms were used, the chance of the unexpected was high. This connected both the anxiety and enthusiasm of real time, with the dramaturgy of composition.

What differentiates free WiFi hotspots from the living room TV zone of satellite transmission is their connection to public space. When it was first introduced, and before the average person would carry their own roving hotspot in the form of a smartphone, free WiFi connections were used to attract potential customers to, for example, a café. At some point it became clear that this model of freeloading, two hour long cappuccino-sipping clientele with laptops were not the most attractive for most businesses. Nowadays, free WiFi is available most commonly in spaces of public transport, McDonald’s, or other large corporate stores like ESPRIT where you can access the Internet from outside if you stand close enough to the store—a sort of egalitarian offering. It attracts bums.

In the often-read The Practice of Everyday Life (1984), Michel de Certeau proposes that consumers are not only passive receptacles of capitalist society, but that they are also producers during their consumption of images or while shopping at the grocery market. A dilemma is described: “the steadily increasing expansion of systems (of production) no longer leaves ‘consumers’ any place in which they can indicate what they make or do with the products of these systems.” Strangely, digital social media formats seem to offer precisely a highly systemized space for consumers to show what they can make of them. De Certeau describes “consumption” as “devious, it is dispersed, but it insinuates itself everywhere, silently and almost invisibly, because it does not manifest itself through its own products, but rather through its ways of using the products imposed by a dominant economic order.”[8] And in this usage, sometimes referred to as syntax, supposedly lies an unforeseen potential.

Nina Könnemann has obviously been interested in these sorts of usages, if we think of the video where men are relieving themselves behind billboards (What’s New, 2015), or how smokers seek out their nervous pleasure-spaces in the anti-smoking cityscape of London (Bann, 2012). And in the music video, Kraft Unseres Amtes by Söhne Mannheims, directed by Könnemann in 2009, the bottle collectors who move in the periphery of any city become the central akteurs in a not-so-functional economy. It is an ambivalent public space where users ‘make do’.

Free WiFi’s own ambivalent structure is open to ongoing interpretation. While the original work was developed through a commission by Melanie Ohnemus as part of an independent project space in Vienna,[9] its later stagings within institutional environs allowed for alternate framings. The second rendition at the Brandhorst Museum in Munich, for example, situated the work as a form of “post-apocalyptic realism.”[10] Its third rendition was a two-city event, occurring separately but simultaneously at the Centre Pompidou in Paris and at KW in Berlin. By the time Free WiFi 4 reached Munich’s Pinakothek der Moderne, it was contextualized within a group show examining the changing perimeters of photography since the rise of Internet and social media.[11]

As a person who studied art and architecture in the late 90s, this might sound like a nostalgic interpretation, but I would like to place Nina Könnemann’s sensibility within Visual Culture,[12]—a field that emerged in a time when the increasing flows of images were described as something intrusive, game-changing, or at least noticeable. In contrast to today’s Instagram aesthetic, where participants willingly post images of themselves and elements of their lives within a gridded corporate structure for anyone to oogle, the presence of the apparatus remains palpable as an audience member in Free WiFi. The viewpoint is from an outward surveillance, sort of an inversion of the Instagram, self-display mirror position.[13] This enactment of the apparatus of technological connectivity is one that touches on a perception in which representation doesn’t slip through the door unnoticed. The proposition that image-discomfort might be humanistic in that it resists capitalist or technological totalitarianism by making representation visible is actually a deconstructive idea. Though Könnemann isn’t suggesting that there is an outside or an other to the apparatus of representation, one might find different forms of usage. The artist has mentioned that an app like Periscope makes the user want to misbehave in some way, like jumping on a bed in Ikea. Which would actually suggest that a medium could encourage dissidence (at least for a moment). A friend told me that when going to KW, he wasn’t expecting a performance but a film. And as audience member, he did indeed feel “out at a shoot.” Könnemann herself has mentioned her interest in methods used to enhance the immediacy of video, which leads to the question: Was this a film set? Könnemann declared that the fourth rendition of Free WiFi at the Pinakothek in Munich would be the last one. The event took place on the opening night, when visitors could encounter the live stream, mixed again by Könnemann’s long-time collaborator, Viola Klein. However, after the opening, the recorded Periscope streaming became a video that after slight edits was put on continuous display in a museal black-box environment for the remainder of the exhibition. This was my second experience of Free WiFi—to watch the footage as a film—where it became clear that Nina Könnemann is also working with an aesthetics of the abseits—the backside of representation, which perhaps could be placed in a minimalist lineage of Slow Cinema (Chantal Akerman, Kelly Reichardt, Richard Linklater). Free WiFi as a film-installation in a museum, framed and represented live streaming as a community-manifested investigation into the fantasy of acts and events.

I would like to thank Nina Könnemann, Melanie Ohnemus, Jakob Schillinger, Helmut Draxler, and Tanja Widmann for chatting about Free WiFi, which significantly added to this report.