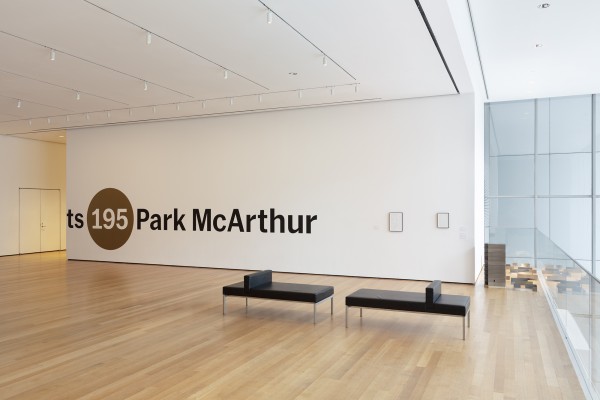 Installation view of Projects 195: Park McArthur, on view at The Museum of Modern Art, New York

The Most Prestigious and Public of Places

In 1971 a camera was set up to film visitors to a gallery with the live video projected in an adjacent room. While this work by Keith Sonnier is not particularly novel for the era the exhibition series it indoctrinated was. The first program of its kind, Projects sought to accommodate neo-avant-garde practices, developing alongside social turmoil, with a more lean and flexible format. Adopting the language of theater, in the wake of Michael Fried, the ‘audience’ was said to activate and be the subject of works like John Giorno’s Dial-a-Poem from Kynaston L. McShine’s Information,[1] which predated Projects by a year and, along with Jennifer Licht’s Spaces, announced the institution’s awakening to new reflexive mechanisms. These exhibitions required “collaboration of people and flexible adjustment of roles and areas of responsibility”[2]  as the museum underwent “re-appraisal and self-examination.”[3] Put another way, the institution grasped a need to better manage its affiliation with and participation in the decentering of authorship and claims to distanciation rather than autonomy. Coextensively, the museum, along with other “non-profit, privately supported enterprises,” suffered from “constantly rising costs and the simultaneous shrinking of endowments.”[4] While this led to staff lay-offs and a strike in the year of Projects’ founding, it foreshadowed a prioritization of real-estate holdings within cycles of expansion and reinvestment, beginning with the 1979 sale of air rights for the construction of Museum Tower.

Navigating Yoshio Taniguchi’s white oak halls, I cup a phone to my ear to hear a crisp, articulate, yet warm voice, “apartment 54B. 3339 SF (310 SM). 3 bedrooms, 3.5 baths. North, South, East, West Exposure. Price: $12,300,000.”  This and other listings are also available to be read from a framed page in a fourth-floor gallery overlooking a crowd of selfie takers in Philip Johnson’s courtyard; the former grounds of Abbey Rockefeller’s residence, as the voice has already reminded me. A label nearby testifies the tastefully formatted folio is an artwork titled After Project 17, “provided to interested parties by the sales team at the 53W53rd showroom,” the voice clarifies. Assuming a prestige and value accrued by the city that plays its host, 53W53 doubles as the address and name of a new Jean Nouvel designed tower under construction on property purchased by Houston based developer Hines from the museum in 2007. Elsewhere, a brochure accompanying this sparse presentation of documents and wall text cues me into the coincidence that Projects 17, held in 1989, featured the work of architects Diller and Scofidio who were commissioned for the museum’s current expansion that will occupy 40,000 square feet of 53W53. Beyond coincidence, the title of their exhibition, PARA-SITES, has been re-used to title the audio-guide-cum-art-work I am listening to. The name of the artist responsible is written large on a wall along with a project number of its own in a format and scale mirroring a graphic on the brochure’s cover: Projects 195 Park McArthur.[5] This too is a work, along with the re-numbering of the project as 195 from 109 to account for the 86 unnumbered iterations beginning with Sonnier’s in the 70s, titled Is this an investment, pied-à-terre, or primary residence?

In the museum’s online Magazine, Sean Anderson, associate curator of Architecture and Design, interviewed by McArthur, elucidates the significance of not only Projects 17 as a formative ‘rehearsal’ for the architects’ career, but a series of architecture exhibitions from the late-80s, sponsored by Hines, the current 53W53 developer: “By breaking down and reassembling those elements that once signified structure […] or power, it was suddenly possible to grasp that history was something to be conferred rather than built. What we saw was a shift from form to language and back again.”[6] One of these exhibitions, Deconstructivist Architecture from a year before Diller and Scofidio’s, did much to cement its participants as household names, not unlike the International Exhibition five decades prior. The textual shift that occurred in the span between those groupings, both curated by Phillip Johnson, was not isolated to architecture but encompassed by a broader postwar crisis of signs that threatened the institutional monopoly on representation. Supplementing the prior recuperation of avant-garde negativity “as a release valve of an unlimited potential for development,”[7] as diagnosed by Manfredo Tafuri, the museum refashioned itself as mutable while facilitating viewers viewing themselves within an inverted panoptical ‘exhibitionary complex’.[8] Never truly broken down, let alone reassembled, the ivory towers of modernism, whether intellectual or residential, entered through ground floor or education department, continued to service the passions of industry and ideology.

“Returning to the Werner and Elaine Dannheisser gallery on the fourth floor, a sculpture titled, STUDIO/HOME sits on the floor,” the audio guide homes me in to stacked stainless steel trays that have been placed in a nook between the stairwell and glass railing. The sculpture is an architectural model for a residential building of McArthur’s design with a foot print based on the floor plan of this fourth-floor gallery. Less a model for expressing a plan, STUDIO/HOME is an oneiric framework that PARA-SITES flushes out. The works, like the residents of this propositional building, are co-dependent generators of a dream beside which the 53W53 showroom and its accompanying models, also described by the guide, stand in stark contrast. Yet they share an inaccessibility common to both the ordained viewer and lay-museum-goer, as the walnut doors and sales agents seem no closer than the ramped pool and multilingual welcome greeting. The Nouvel tower is a haunted building, a construct of debt and insurer of bonds that structure the inevitability of MoMA’s future growth. As society and city, were once modeled on the factory, from which spurred the grid that brings a Manhattan address relevance, our current regime of speculation and finance renders every opportunity one for investment. And as the old tactic was to ‘occupy’ space, ‘exploding the contradictions’, McArthur finds residence within, yet does not and perhaps cannot exceed, the hospitality of the institution’s reflexive desires. However, the dream, without being bound to vision, is a slippage between expectation and procedure that mirrors the renumbering. Picking up from where the guide leaves off, I imagine a scenario through which, before the institution arrives at its inevitable hiccup ‘after’ Projects 194, McArthur’s building might be constructed. Perhaps this occurs in the airspace above the current exhibition with the museum selling the rights to itself, purchased with David Geffen’s next gift. It’s the transcription of an idea across space and time between multiple redundant but enriching sites that makes Projects 195 one or more pied-à-terre.

[1] Dial-a-poem featured poets reading their prose accessible by dialing a number from any telephone including several installed in the exhibition space. The FBI paid a visit to the exhibition listening to all of the poems, which featured readings by Kathleen and Eldridge Cleaver and Bobby Seale.

[7] While more sophisticated in its application, Diller and Scofidio’s Projects 17 featured CCTV, echoing Keith Sonnier’s project two decades prior. This marks the recurrence of a body based discourse in architecture following the neo-avant-gardes that the Projects series sought to encapsulate. It should be noted that this discourse on the body more than hinted at a universality that no longer can be taken for granted.

[8] Rem Koolhaas participated in the Deconstructivist Architecture exhibition, the shift to text with Delirious New York and in the pages of OPPOSITIONS.