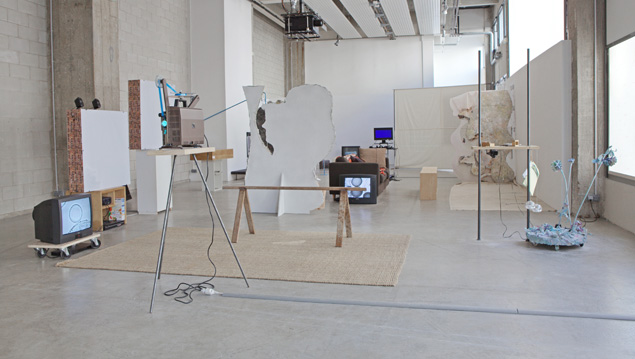 David Douard’s show “Innerspace” seems to trick with several false starts. The title, borrowed from the movie by Joe Dante, in which a miniaturized Dennis Quaid explored the mysteries of the organism from the inside. The quaint charm of Jean Comandon’s documents and films that are scattered throughout the installation—the presentation of the archives of this pioneer of scientific cinema being actually part of the Bétonsalon art center’s invitation to Douard. The atmosphere of teenage confusion created by the random gathering of screens, projectors, entanglement of wires, shapeless cushioned seats, and a sofa. Or, the sophisticated aggressiveness suggested by the portraits of virtual characters displayed on the walls and highly sexualized sculptures. Or else, the odd landscape produced by the ambiguous associations of the vegetable and the mineral, metal and plastic, electronics and human figures.

All these shades, these impressions, show how Douard’s work unfolds and spreads through states (states of consciousness, emotions); through raising and catching attention (elements grow in all directions, and the visitor is constantly distracted by the start of a film or a soundtrack, or by incongruous details, such as a virtual cap, a useless bench, cereal boxes, etc.); as well as through echoes and moods (parted by sculptures, pieces of furniture, and floor elements, the space remains fluid, continuous, thanks to the repetition of patterns and the dissemination of figures). Its course is dense and bewildering. This could be a home, or a phantasmagoria built for experimenting. In this closed space Douard concentrates on the expressive and metaphoric potential lying in forms that he hybridizes and sets in motion. Found objects, tools and devices get new functions, are attributed new uses: torn newspapers picture the digestive process, metal pods come to evoke silent beings. Readymade signs are turned into unstable and shifting organisms, as David Douard saturates the space, bringing out a narrative dimension.

Disseminating bits of narrative and displaying characters, Douard puts together different realms and shifts meanings. The work Blue, for example, consists of a screening of Derek Jarman’s last movie, Blue, on a flat screen set on a standard office desk, cluttered with wires, in front of which there’s a pair of sneakers covered in yellowish plaster. The installation highlights how the complex soundtrack, the recorded voices and electronic music, along with the deepness of the virtual blue screen, coalesce in a synthetic entity able to restitute the diary of the filmmaker dying of AIDS. Elsewhere, the opening minutes of Gregg Araki’s Mysterious Skin, showing a child’s face in ecstasy under a shower of multicolored cereal filmed in slow motion, are projected from the belly of a pair of abstract sculptures that are also home for boxes of corn flakes. Drawing on the appeal of the cinematic and the crude anthropomorphism of these vaguely domestic volumes, the impression of torpor, even if slightly parodic, becomes pervasive, stuck in the objects and their arrangement. Further on, small spherical speakers hanging suggestively, softly play a generic video game soundtrack. Synthesized in the material, affects seem to corrupt the substances they go through, while ensuring their sensory reality; as if the usual opposition between the coolness of networks and the obsolete warmth of organs was bypassed by the reality of their very overlapping, and their equivalence as long as they’re both conductors.

Here Comandon is used by Douard as a pretext to develop the scenario for this connection. Rather than dipping into the images provided by the filmmaker’s archives, the artist starts by sketching a possible update of Comandon’s research: from the Internet he grabbed pieces of information about a project involving a microscope camera lens for the iPhone, and illustrates it with printouts and an absurd motto, “True Vision Ltd.” This device would focus on the skin, an ambiguous surface that is one of the key motifs of the show—present here as an object to be examined, but elsewhere as a surface echoing that of a screen, or a protective layer on some sculptural works. The model for any interface, skin also becomes a stage for physical, wavelike or psychic events. At first its “digital” rendering, by definition smooth and “perfect”, makes it a neutral surface, in tune with a screen culture that takes for granted the shiny efficiency of the visual. However these 3-D models, more grotesque than uncanny, come to mirror elements such as the scribbled, transparent figure of a microorganism repeated on the windows of the exhibition venue. Another short circuit is made between these fetishistic surfaces and the hygienist films of Comandon that promote a new body culture, but in an equivocal, cartoonish way. As Douard accumulates aesthetics that are supposed to account for the same object, but that do not make sense together, he debunks their “qualities” and appeal; the conundrum flesh/screen becomes then a question of fluidity, health, and altered states. Human figures are displayed as conventional, 3-D models as awkward, while the sculptures develop unexpected sensual qualities, through a wide range of texture effects, from blisters and bumps to depressions and slits. Douard creates an environment where forms, events, experiences of the body, the mind, the digital, the virtual and the mechanical, overlap and are considered on the same phenomenal ground.

What emerges from the shocks and hybridizations is a form of “animism,” which, beyond the suggestion that a form can move, aims at engaging the viewer in a more subjective, ambiguous, and sometimes willingly embarrassing, acknowledgement of his ability to attest the very presence of feelings in an inanimate object or an expressionless surface. The technological “other” doesn’t appear anymore as opposed to nature, or part of a power (or use) struggle, but as one more possible position in the system. There’s neither a romantic take on nature, nor any metaphysic point of view behind these metaphors. Animism here plays a hermeneutic role, as it leads to look at our abilities to act and react, to perceive and build a relation to the world; furthermore, it demands that we also consider how our “states” are objects, in the same way (with the same origin) as the objects that we take as the support for our projections.

Proliferation, saturation, fluidity: “Innerspace” is indeed marked by a runoff, an overflow that opens to a problematic—because irrational—economy. The hyperconnection of states of consciousness, emotions, and imagination, troubles the object/subject relations, as if these positions were not making sense anymore from the perspective of production. In the ecosystem of “Innerspace” volumes, images, sounds, technological devices, seem to be spreading and growing in a self-generated mode, organically and disorderly, without the need for a cause or specific impulse. Any value system is thus suspended, since elements and shapes are potentially limitless, repeatable, autonomous and self-producible. Significantly sculptural elements often recall a confusion of kingdoms: their cracked surfaces seem to be governed by some laws of nature still to be understood, reminiscent at times of a wasteland where weeds and wild colors appear as if by spontaneous generation, or an acned flesh, constantly generating new hormonal protrusions, the marks of emotions that are too strong and too fast, or information that is ill-digested and bogged down. The efficiency or the presupposed speed of flows and networks is melting in apathy, shattered on screens and grounds that are hosts for new bodies to grow, grotesque and decadent. We are confronted with a “counter-nature” of an oddly welcoming sort. There’s no art but artificial—which, in the mode of production pictured by David Douard, takes the dimension of too much expenditure, a short circuit between the mind and body, between desire and its failure, overwhelming the economic rationality.

Translated from French by Benjamin Thorel

▲ Back to top ◄ BACK TO CONTENTS / MAY #9 ► From the same author On the edge of things—Clément Rodzielski: pictures, panels and mirrors in May #1